Wearing possibilities on your sleeve

QR (quick response) codes and augmented reality (AR) applications are technologies being embraced by teachers, and others, as they provide new possibilities for supporting learners in the classroom and beyond. These technologies were not initially developed as a classroom or instructional tool, but teachers have come to realise their value in supporting teaching and learning programs. For example, just google ‘QR codes in the classroom’ and you will see what I mean http://bit.ly/1GGbKwM

QR codes were in fact developed in 1994 in Japan to help the auto industry track a number of processes during the manufacture of motor vehicles¹. Since then they have spread to support sales and marketing across all industries and services, and today these little black and white squares are everywhere including the classroom. AR, a technology which overlays the real world with the virtual world, bringing the two together, has been around even longer than QR codes but the term was actually not coined until the 1990’s². AR apps like Aurasma are providing teachers with new tools to support differentiation http://www.spectronics.com.au/blog/apps/aurasma/.

Google Glass is an example of wearable technology, but, except for a select few, it is just about possible to get your hands on a pair at this stage even if you have offered your name up as Glass Explorer http://www.google.com/glass/start/how-to-get-one/. While waiting for this to happen so I can road test a pair, I have decided to check out another new wearable technology, called Nymi. The Nymi is technology worn as a wristband. It stores the wearer’s personal details, including passwords, passcodes and more, and allows the wearer to securely communicate their identity to all their favourite devices. Using their unique cardiac rhythm to authenticate their identity, it allows the wearer to wirelessly take control of a computer, smartphone, even a car and more. Nymi has been in the development stage for the last 12 months or so, and is now taking pre-orders. And yes, I have pre-ordered, wanting to explore more!

What are the possibilities for diverse learners with the Nymi wristband? At first glance I see simple things like not having to type in your password or passcode when using your computer, tablet or phone. With a Nymi wristband, entering personal details may now just be a matter of raising your wrist and pointing. This could be great for those with physical access challenges, wearers with vision impairments, and those with literacy or memory issues. It is these simple things, such as the requirement to type in your password or complete an online form, which are often not so simple for some. 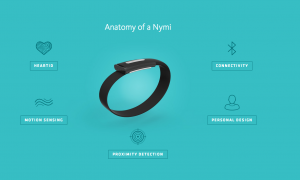 The possibilities are huge in the whole area of wearable  technology, and I look forward to getting my hands, and wrist, on the Nymi to check it out to see what else it can do. Bionym, the company responsible for the Nymi, is asking developers to see what applications they can develop to use the Nymi http://dev.getnymi.com/. I hope those interested in accessibility and learning will get on board.

Teaching is indeed a profession for which many of us wear our heart on our sleeve in ensuring we make a difference for ALL our students. Now it might also be a case of wearing new possibilities on our sleeve as well.

Want to learn more? Check out a wealth of videos and resources via a ‘Spectronics Online’ subscription below.

Or log in here if you are already a Spectronics Online subscriber.

“I firmly believe that saying “we’ve always done it this way around here” is dangerous! I enjoy disrupting that way of thinking and watching the excitement of teachers being re-motivated. Adding new technologies into the mix is powerful in driving that positive change. Driving that positive disruption”

Greg has been actively involved in supporting the learning of students with diverse learning needs for over 30 years. During this time he has worked as a classroom teacher, school executive, district consultant, regional manager with the New South Wales Department of Education and Training, and Professional and Consultancy Manager at Spectronics.

Greg is committed to exploring the possibilities that exist for ALL students through the use of technology, wherever and however teaching and learning takes place.

Greg presents at national and international conferences, and provides training and consultancy across Australia, New Zealand and South East Asia. He is a Google Certified Educator, Certified Apple Trainer, and a Certified Texthelp Trainer. Greg is a committee member of the NSW Australian Association of Special Education, and is a member of the editorial committee for the AASE Journal, Special Education Perspectives. He recently became a member of the International Committee of the Inclusive Learning Network of ISTE.

View all posts by Greg O'Connor

One Response to Wearing possibilities on your sleeve